What is NFT? A Brief Guide to Non-Fungible Tokens

After the rise of cryptocurrency, NFT is the next big thing that gathering a lot of eyeballs. NFTs are so popular that the American tv show “Saturday Night Live” once aired a skit of comedian “Pete Davidson” asking what is an NFT? While singing a parody version of the song “Without Me” by Eminem.

These so-called digital assets are said to be the future of art and digital collectibles while for some people, NFT is nothing but a hoax. Nonetheless, it doesn’t change the fact that people and even celebrities are packing bags of money with these NFTs.

The CEO of Twitter, Jack Dorsey famously sold his first tweet for almost $3 million, an art piece by Beeple was sold for $69 million, and Zoë Roth, the person from the disaster girl meme sold her photo for $500,000. All through NFT!

However, the question remains, what NFT actually is? And why is it so popular? This article will try to answer these burning questions and help you get a better understanding of these non-fungible tokens.

Well, the term “NFT” is an acronym for non-fungible tokens. The word fungible stands for replaceable and non-fungible refers to something which cannot be replaced. For instance, a 10 dollar bill can be swapped with 10 bills of 1 dollar, but the value of the currency will remain the same. However, in NFT, this is not the case. Every NFT is unique and holds its own value, which means it is non-fungible and cannot be exchanged.

Coming to a more technical term, NFT refers to the data or information stored in a virtual ledger called “Blockchain”. These data can represent anything unique like a photo, gif, or video.

Purchasing an NFT gives you a token of ownership of the digital recording and the transaction is recorded in the blockchain. This makes an NFT a one-of-a-kind digital asset that can be brought or sold by the owner.

According to Statista, total sales of NFT worldwide have been increased from 23.7 thousand in April 2021 to 93 thousand in June 2021. 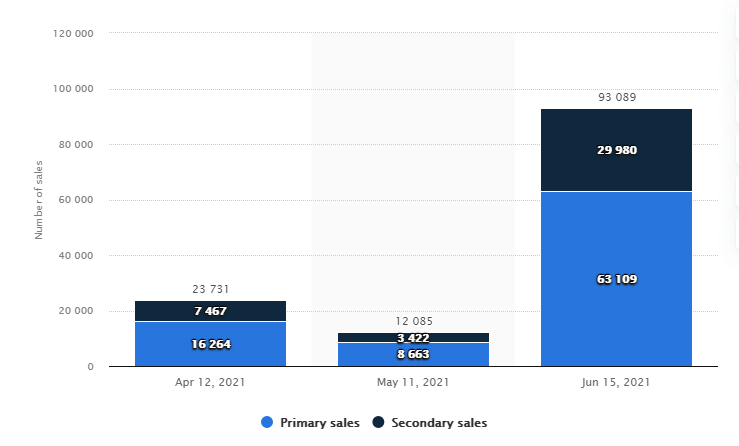 Why NFT is trending?

Many factors have contributed to the hype for NFTs. Firstly, it began when many of the celebrities began to dip their toe into the NFT pool. Mike Winklemann also know as “Beeple” for instance, sold his digital art named “EVERYDAYS” at a whopping $69 million as an NFT.

Furthermore, YouTubers like Amanda Cerny and Logan Paul also auctioned their personalized NFT at hundred of thousands of dollars. Even the organizations like the NBA also sold a top shot clip of a match as an NFT. This lead to a surge in popularity among the population

At a very basic level, NFT is a digital artwork that the creator sells to the highest bidder, the bidder then receives a token of ownership. The token is a certificate that reserves the rights of the NFT to a single person. It also gives the person the right to sell the asset in the future.

NFTs are a part of blockchain technology, a digital record of transactions openly available and handled by the public. The sale and purchase of NFTs are recorded on these blockchains which are handled by several computers all around the globe.

Can NFT stop the piracy of digital art?

To put it in simple words, no, NFT can not stop the copying and piracy of the original art. Anyone on the internet can download the artwork or can get access to the content being sold as an NFT from different sources.

NFT however, helps the creator to certify his artwork as its own and can retain the rights original version. The creator has the original artwork and any copied content is like the duplicate printout of the original.

Is this just a bubble? What does the future of NFT look like?

The NFT market is so in rage that people can’t help to wonder that is this hype is just a bubble? And if yes, when will it burst. Well, the population is divided for this question. Many people think that NFT is just a start of a new era of digital asset investment while for some, it is the concept that is bound to crash.

Nonetheless, it is always wise to research before you put your money in NFT. there are some areas of concern that can prove to be a roadblock for NFTs. problems like overuse of electricity, volatile market, and decrease in popularity can be the cause of concern for many investors.

Is NFT a type of Cryptocurrency?
NFT refers to the Non-fungible tokens. It is a digital representation of any virtual art, gif, or video. These NFTs are stored on a digital ledger called the Blockchain. Although, cryptocurrencies also work with blockchain, however, they are not related to each other.

Do creators benefit from NFTs?
Yes, NFT allows the artist to call the artwork his own. Earlier there was no way to track down the artist of an artwork existing on the internet. However, representing your artwork as NFT allows you to track down the owner of the art. Furthermore, the artist can sell his piece at a virtual auction and can claim royalties in the future.

Final Thoughts
In the end, as volatile as the crypto market is, the future and growth opportunities for NFT in the crypto market seem enlightening. NFT introduces an all-new market for investors and art collectors to dip their toes in. So, if you are looking to create an application for the NFT platform, Appther technologies can be the answer to your development needs.

For any queries, you can connect with us via our website Appther.com or message us on our Whatsapp – +91 9911432288. You can also visit our page and get a look at our diversified portfolio.

1 thought on “What is NFT? A Brief Guide to Non-Fungible Tokens, How It Works?”